Skip to content
Join 1,607 other subscribers
Follow Days of Thieves on WordPress.com
Posted on December 19, 2018December 22, 2018 by daysofthieves 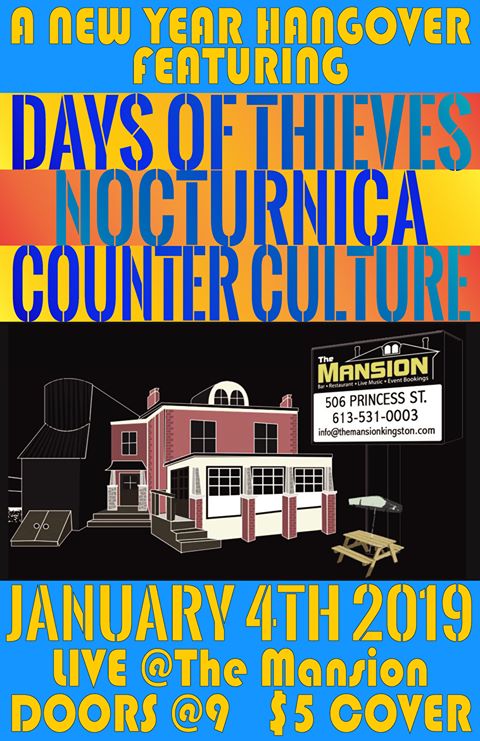 Kicking off the new year in style, local Kingston bands Days of Thieves, Nocturnica, and Counter Culture will be rocking The Mansion Kingston on Friday January 4th.

With their self-titled debut EP released on November 30th, Local Kingston 2-Piece Rock Band Days of Thieves are looking forward to a great time on Friday January 4th as they play another show back in at The Mansion Kingston to continue their 2018-19 tour promoting their new EP.

In the short time since its release, their EP has already garnered play, has been featured in rotation, and has received positive praise through local Kingston stations CFRC 101.9fm, Q108 Kingston, it has also been featured on the FuzzHeavy Podcast based out of Denver, Colorado. And in the new year, it will be featured in magazine publication through a sampler CD and an album review from the United Kingdom in an edition of Classic Rock Magazine, which will be sent out to over 40,000 monthly subscribers.

On Friday evening, Days of Thieves will be sharing the stage with two other great bands, Nocturnica, and Counter Culture. These bands will be rocking the doors off of The Mansion Kingston. The doors open at 9 and it is only $5 to see these three great bands.

Days of Thieves will be kicking off the night, hitting the stage around 9:30. To RSVP, please check out the A New Year Hangover event page.

Started as a way to avoid working with flaky musicians, Nocturnica is a band 10 years in the making. Having been in a variety of bands previous, Dwight, Robert and Jay have each decided the others are worth putting up. Originally a guitarist, Robert grew tired of looking for drummers after the last one quit and decided to take matters (and sticks) into his own hands.

Looking to bring rock back to Kingston with heavy bass, screaming guitar and thunderous drums, Nocturnica will be sure not to disappoint.

Playing ‘Limestone City Punk’, Counter Culture is a gritty Punk band from in and around the Kingston landscapes. Featuring Ethan on Guitar, Spence on Vocals, Woody on Bass, and Dan rockin’ the Drums.

With the essence of power rock groups such as Soundgarden, Rage Against The Machine, Royal Blood, and Death From Above, Days of Thieves captures the intensity with hard hitting rock and captivating lyrics that pushes powerful messages about power struggles in the modern day. Thick chunky rock riffs with hauntingly catchy melodies. Kingston’s 2-piece rock band Days of Thieves promises to deliver. Mike Brown – Vocals/Guitar/Bass Kyle Cochrane – Drums View all posts by daysofthieves